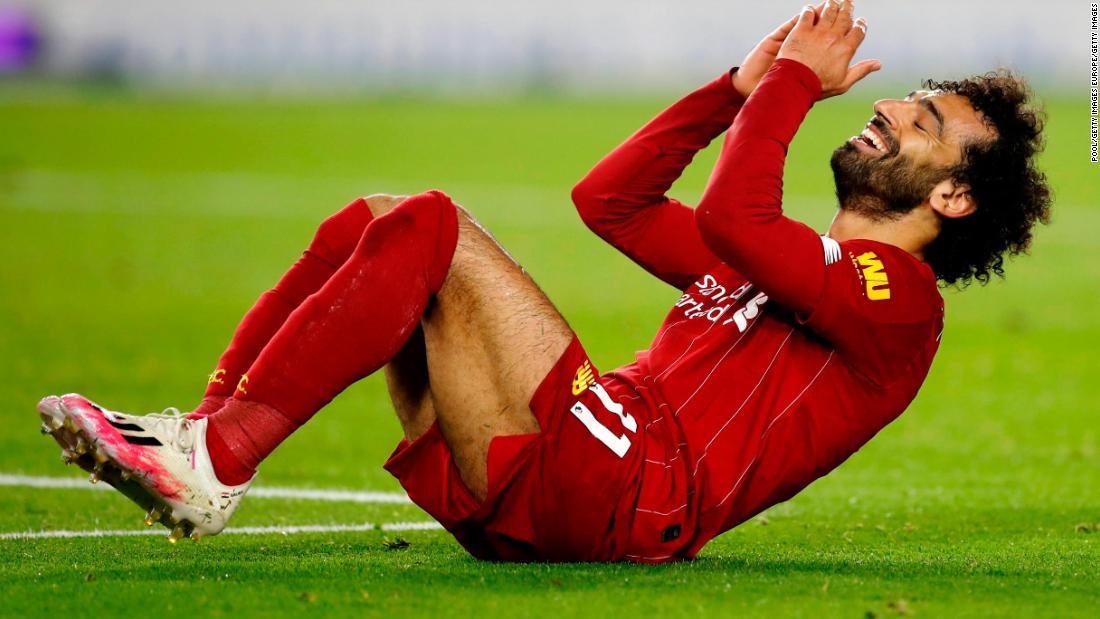 Some — my wife — labeled this thought “crazy.” We are approaching 15 years of wedded bliss, or at least we were before the return of the EPL. You know what is crazy? The editors in charge of this website — better known for serious and sober reporting on events unfolding in a world often in turmoil — agreeing to the idea.

The long and arduous road ahead begins — but of course! — with a goalless draw between Aston Villa and Sheffield United on Wednesday, June 17. Just after the referee blows his whistle to start the game, both sets of players and officials take a knee to show solidarity with the Black Lives Matter movement.

Later in the first half, there is complete chaos as a perfectly good goal for Sheffield United is ruled out due to the referee’s watch not buzzing to signify the ball had crossed the line. The company in charge of goal line technology — Hawk-Eye — admits to the error and “occlusion” enters the football lexicon. It basically means “we got it wrong. Big time.”

Within 45 minutes of football returning, we have had major breaking news, and technology breaking down in a major way. It is all rather unsettling.

The feeling is compounded by the second of these 92 fixtures, with Manchester City wiping the floor with a porous Arsenal defense, David Luiz going AWOL, and it all unfolds against the backdrop of pouring rain in Manchester. Some things never change. Or as famous City fan Noel Gallagher once sang, “Rain like rain, rain like rain / Rain like rain, I don’t care for the sunshine.”

You might think there would be general happiness at having football back, what with all the uncertainty caused by the pandemic, yet anger persisted in those early days of ‘Project Restart.’

Former Manchester United captain Roy Keane, now working as a pundit for British broadcaster Sky Sports, ripped into United goalkeeper David de Gea, who was at fault for a goal by Tottenham.

“I would be fighting him at half-time, swinging punches at that guy,” railed Keane. ‘I’m sitting thousands of miles away and feel scared.

But it’s nothing compared to the first Saturday of action, when Brighton striker Neal Maupay wages a one-man war against Arsenal

In the first half, he took out goalkeeper Bernd Leno with one of those innocuous looking, but season-ending, injuries. Words are exchanged and allegedly continue throughout the game.

Maupay has the last word with his injury-time winner. Then Arsenal midfielder Matteo Guendouzi targets his compatriot and it’s not pleasant to watch. Afterwards Maupay says Arsenal “got what they deserved.”

Minutes later, I arguably get what I deserve, with my wife and kids relegating me to a corner of the kitchen to watch a less than enthralling first half between West Ham and Wolves unfold on my phone, while ensuring the cat is being fed.

I later inform them that not witnessing Wolves’ Pedro Neto score one of the goals of the season is their “loss.” I’m not sure they’re convinced.

The first weekend concludes with the Merseyside derby ending in a goalless draw. Barely 10 games in and I’m starting to wonder if Ii have stamina for my very own project ‘Project Restart.’

If you fail to plan, you are planning to fail as I discover when I come up against a roadblock of four simultaneous kick-offs.

It’s one thing to use the TV to watch Manchester United see off Sheffield United, while another defeat for Norwich occurs on the computer, but the two other games don’t watch themselves.

After briefly catching up with the family, who are starting to forget me, I spend another 180 minutes turning my lifelong love affair with football into a chore I now dread. I head to bed — not for the first nor last time — questioning my life choices.

Then, like a bolt from the blue(s), Liverpool become Premier League champions, without even kicking a ball.

Christian Pulisic, who has been possibly the best player of ‘Project Restart,’ gives Chelsea the lead in a match Manchester City must win. Kevin de Bruyne’s sublime freekick levels the score, but the Blues retake the lead courtesy of Willian’s penalty, thus ending 30 years of league hurt in Liverpool.

Talking of hurt … Do I have to watch the remaining 72 games?

A day off follows. No games. How sweet it is. I take a walk. Outside. I speak to my family. In more than monosyllabic grunts. They seem to be holding up. Wish the same could be said about myself.

When I say “day off,” I still have my actual day job to maintain, which I imagine is similar to yours, filled with countless meetings and emails (though it goes without saying I am incredibly lucky to literally watch football for a living).

Truth be told, I haven’t explained the nature of this piece to most of my co-workers, partly out of embarrassment and also because I can’t let it get in the way of what I am supposed to be doing: Meetings! Emails! Or should that be watching Brighton 0-0 Newcastle?!

Yet by the time I’m a third of a way in, I start to loosen up, and am at peace with myself.

When three more games kick off at the same time, I master the task(s) with relative ease. One eye on the TV, one eye on the computer, while the phone is used for the third match. That’s what I call Premier League multitasking.

I’m in the zone, I’m like The Terminator. I can’t be reasoned with. I don’t feel pity or remorse or fear. And I absolutely will not stop. Ever. Well, until July 26 comes around.

Not that there aren’t hiccups. A family hike to a local waterfall is spoiled by my watching Newcastle and West Ham on the phone, with my daughter thoroughly unimpressed by my stubborn stance. That said, it is a far better than expected 2-2 draw.

A few weeks later, on some actual time off, I spend much of the morning agonizing over my Fantasy Premier League line up. “Who do I leave out between Kevin De Bruyne and Mason Greenwood?”

I ask the family. “Is this a more difficult decision than naming your children?” responds my daughter. Like a snap call in poker, I immediately go all in with my response in the affirmative, and the raised eyebrow from my wife is another low point of this experiment (for the record, I bench Greenwood). Alas, the anecdote is livelier than the match which follows.

While fretting about my family’s feelings, I surround myself with the familiar figures who populate our beautiful game. Thus Tottenham vs. Everton on a random Monday becomes a game of two hugs, as managers Jose Mourinho and Carlo Ancelotti ignore social distancing guidelines and embrace.

On the pitch, Tottenham’s Hugo Lloris and Son Heung-Min have an altercation apparently stemming from the goalkeeper being miffed with his teammate for not tracking back. Mourinho describes the clash as “beautiful,” because of course he does. It’s moments like these where I realize I am doing a “beautiful” thing indeed. And I shall keep telling myself that for years to come.
On Twitter, Rory Smith of the New York Times observes that “one thing we have all learned from the last four weeks is that the Premier League looks a lot better when you don’t watch all of the games.”

I don’t know whether to laugh or cry … so as well tuning in to Manchester United vs. Southampton, I watch the League One playoff final between Oxford and Wycombe on the computer.

After beating Chelsea in a 5-3 thriller, the Reds finally do so, courtesy of captain Jordan Henderson. Is it too late for the powers that be to make one more winner’s medal, and ship it to Atlanta, for services to football?

On Sunday July 26, the marathon Premier League season concluded. I like to think I deftly alternated between games on televisions and devices as skillfully as Sadio Mane slaloms past defenders before smashing the ball into the net with unbridled joy to complete Liverpool’s 3-1 win over Newcastle.

I was captivated by the race for those final Champions League places — congratulations to Manchester United and Chelsea — while sympathizing with the plight Bournemouth and Watford found themselves in, by getting relegated.

Two days earlier, the league confirmed the start date of September 12 for the 2020/21 season. 380 games set to unfold in the space of eight months. It could be my greatest challenge yet. Bring it on.

Tags:footballPremier League: What I learned from watching 92 games of football in a row - CNN