Trump is calling protesters terrorists. That puts him in the company of the world’s autocrats 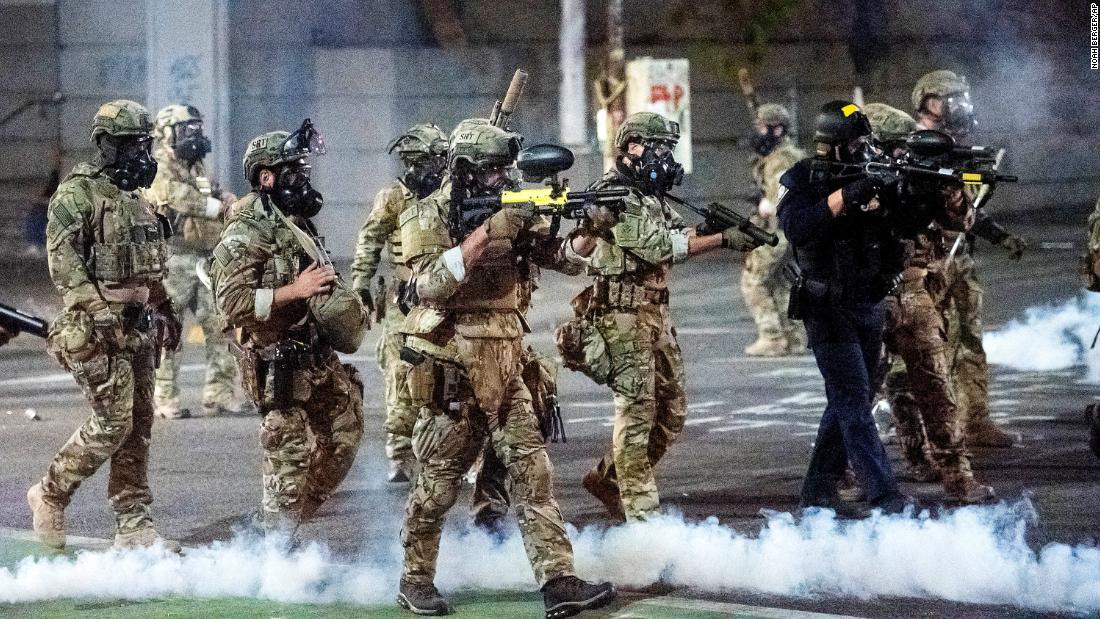 It turns out that among the hodge-podge of paramilitary-style officers wearing no name badges were many from the Department of Homeland Security, established after 9/11 primarily to deal with terrorism. More specifically, the officers were from the department’s Customs and Border Protection agency, which is supposed “to safeguard America’s borders” from dangerous people and materials.

“These tactics include deploying federal agents without identifying insignia in an apparent effort to evade transparency and accountability, snatching people off the street with no apparent reason for apprehension, and using potentially deadly munitions to harm peaceful protesters. These actions are out of control. They are more reflective of tactics of a government led by a dictator, not from the government of our constitutional democratic republic,” they wrote, adding they were “chillingly reminiscent of autocratic governments that ‘disappear’ critics and opponents.”

In Egypt, where anti-government protests are essentially banned and forced disappearances are not uncommon, thousands of people were detained at rare demonstrations last year calling for President Abdel Fattah el-Sisi’s resignation. Rights group Amnesty International said more than 100 detained were under the age of 17, dozens of whom faced charges for being members of terrorist organizations.
In Turkey, President Recep Tayyip Erdogan openly describes anti-government protesters as terrorists, and many have been jailed under anti-terror laws, along with journalists, academics and rights activists in the past two years.
And earlier this month in Hong Kong, a 23-year-old pro-democracy protester became the first person to be prosecuted under China’s new national security law, widely seen as a way for Beijing to seize powers from the semi-autonomous city. Tong Yong-kit was charged with inciting secession and terrorist activities under the law, accused of ramming his motorbike into a group of police officers.
China also uses its counterterrorism drive well beyond protests. It has used a secessionist movement and bouts of political violence in the autonomous Xinjiang region to justify the detention of more than 1 million people from Muslim-minority groups in “re-education camps,” according to estimates by the US State Departments and several human rights groups.
It would be easy to dismiss the US President shouting “terrorist” as Trump just being Trump, but his calls for designating Antifa a terrorist organization shows he has an appetite for new counterterrorism laws to quell dissenting voices.

Trump has blamed Antifa — short for anti-fascist, a loosely based movement with no formal leader or headquarters — for acts of violence amid largely peaceful protests. There is no legal instrument in the US to designate wholly domestic groups as terrorist organizations, yet Trump continues to insist he will have the group outlawed.

Who is a terrorist?

Anti-terror laws have been problematic in many parts of the world, and issues often stem from the fact that there is no agreed international definition of what a terrorist is. In Turkey, academic and rights activists seen as supportive of President Erdogan’s rival-in-exile, Fethullah Gulen, have been jailed under terrorism laws. In Russia, a journalist critical of the country’s lack of civil freedoms was recently convicted of justifying terrorism.
After the 9/11 attacks, the UN Security Council passed a resolution urging its member states to devise and update laws to adequately address terrorism. But they left it to individual countries to define terrorism.
What followed was a rash of anti-terror laws that have, in many countries, been criticized for being so broad in definition, sometimes deliberately, that they essentially legalize an abuse of governmental power. In some cases, definitions are so broad that instead of solely targeting ideologically driven people who pose serious security threats, they also allow governments to target their critics.
The Philippines, for example, has just passed an anti-terror law that the UN’s human rights chief Michelle Bachelet urged President Rodrigo Duterte not to sign, saying it blurred “important distinctions between criticism, criminality and terrorism” and that it needed “safeguards to prevent this misuse against people engaged in peaceful criticism and advocacy.”

Definitions have been a major problem since 2001, Conor Gearty, a professor in human rights law at the London School of Economics, told CNN.

“What you had was the UN saying ‘Get out there and do counter-terrorism and we’ll let you decide what terror is.’ And that was just a gift horse for authoritarian regimes,” he said.

While the picture in the US may not be as grim as in places like China, Turkey and Egypt, the events in Portland, as well as an earlier crackdown on protesters outside the White House recently, are just the latest signs that Trump is looking to those countries for inspiration, said Gearty, who describes Trump as an “aspirant authoritarian.”

That should give Americans cause for concern, he said.

“What Americans should also be worried about is the apparent support for this from the rank and file, and the absence of any very senior voices opposing this,” he said.

Not only does the country’s security apparatus lack vocal opponents of the repression seen in Portland, some of its most senior members are suddenly taking an active part, even though they are supposed to be independent of domestic politics.

On Monday, acting Homeland Security Deputy Secretary Ken Cuccinelli retweeted videos and images of Portland, describing the situation there as “terrorism.”
The nation’s top military official, Gen. Mark Milley, apologized after criticism over his appearance with Trump in a photo op outside a church near the White House. Police used rubber bullets and pepper spray projectiles to clear protesters only moments earlier to clear a path for the President.

Trump has promised to ratchet up his Portland approach, saying in an interview with Fox News on Thursday that he could send as many as 75,000 federal agents to other US cities, in what he calls “Operation Legend.”

He argues that these cities — all with mayors who are Democrats — have been overrun by criminals, particularly as anti-race protests continue. He has criticized local leaders and police for failing to take a tough line on crime.

But his critics say Operation Legend is an unabashed re-election pitch by Trump to project himself as the country’s law-and-order president ahead of the November vote, one that seeks to paint his Democratic rival, Joe Biden, as anti-police.

What could easily happen is that these protests transform from an anti-racism movement to a wider anti-government movement, according to Luis Schiumerini, an assistant professor of political science at the University of Notre Dame in Indiana.

Schiumerini co-authored a recent study on protests in Turkey, Brazil and Ukraine, looking at how aggression by security forces can trigger “backlash protests.”

“There’s a clear pattern in many countries. Protests can start small, demanding something in particular, but when there’s an attempt at repressing them with so-called ‘less-lethal weapons,’ like rubber bullets and tear gas, instead of suppressing the protests, they grow, and they often grow to become massive movements,” Schiumerini said.

There are many recent examples. In Iran, demonstrations that began last year against a hike in fuel prices that were met with heavy force became months-long wider anti-government protests. Peaceful demonstrations against an extradition bill that began in 2019 in Hong Kong quickly turned into more aggressive pro-democracy protests after police used rubber bullets and tear gas on protesters.

Experts said that in Trump’s case, he may be provoking such an escalation in the hope that a divisive event will evoke a strong reaction from his base.

Whether this will work in Trump’s favor at the polls will depend partly on which side comes across as more violent and which side appears to be more reasonable, Schiumerini said. Voters will also evaluate whether the President’s actions are reducing or exacerbating violence, he said.

“Trying to brand protesters as terrorists, it’s something we saw consistently in our study, especially in the case of Turkey. For the government to benefit from this, however, it’s very important to turn public opinion to depict protesters in a negative fashion,” he said.

“The success of that hinges on how protesters behave. The label of being a terrorist becomes more convincing when the behavior of protesters can be described in a similar way.”

Tags:politicsTrump is calling protesters 'terrorists.' That puts him in the company of the world's autocrats - CNNPolitics