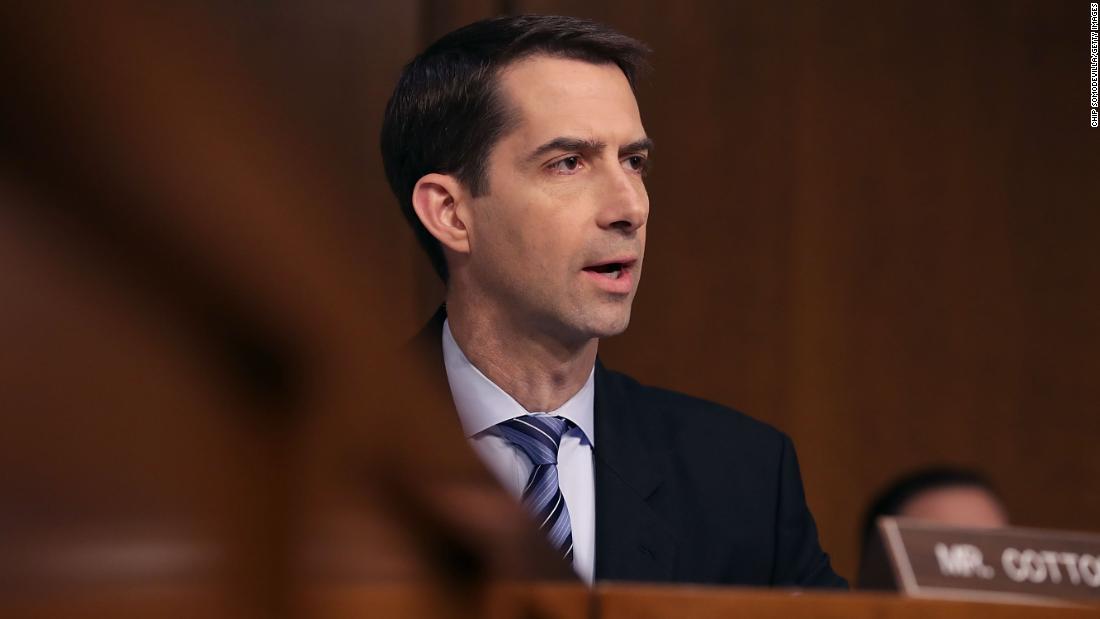 Here is what he told the paper: “We have to study the history of slavery and its role and impact on the development of our country because otherwise we can’t understand our country. As the Founding Fathers said, it was the necessary evil upon which the union was built, but the union was built in a way, as Lincoln said, to put slavery on the course to its ultimate extinction.”

It’s a belief likely held by millions of White Americans and also by a number of white historians. It’s just that Cotton said it more plainly and directly than most. It’s that ability — White Americans’ penchant for compartmentalizing and rationalizing when it comes to issues of race — that has made it possible for a president as inept and racist as Donald Trump to have any chance of being re-elected.
Even amid the racial reckoning underway in America, there’s evidence that that type of rationalizing remains. Cotton is merely Exhibit A. For example, while polls show a growing percentage of White people are willing to acknowledge that Black people are treated differently by the criminal justice system, a majority tell pollsters they still believe Confederate monuments should essentially be left alone — like Cotton does.

Cotton’s plainspoken demonstration of racist rationalizing to the Arkansas paper began after he tried to use his position as a US Senator to cancel and smear the groundbreaking 1619 Project, a New York Times initiative that forced readers to see this nation’s founding anew, through the eyes of the enslaved and those who came after them — instead of through the eyes of the enslavers, as most traditional histories of America have done. Cotton wants to deny federal funding to schools who use the 1619 Project as a teaching tool. Several schools have adopted it; others plan to. I’ve used it in my journalism classes at Davidson College and will again this fall.

Cotton shouldn’t be dictating what goes on inside classrooms, and those serious about free speech should vigorously oppose his proposed law, which would financially penalize school districts using the 1619 Project curriculum by depriving them of federal professional development funds and lowering their overall federal funding to reflect any “cost associated with teaching the 1619 Project, including in planning time and teaching time.”

But that he attacked the 1619 Project in particular is telling. The project is an unapologetic series of essays and other works that has upended America’s foundational story like little else. Its authors, led by Pulitzer Prize-winning New York Times journalist Nikole Hannah-Jones, didn’t treat the founders as near god-like wise men. Instead, they told the truth about what it means for a nation to have been built on a contradiction: that all men are created equal but that Black people needed to be in chains and shackles. They explained why Black people decided to love a country that hated it and why it took Black people to make real the words the founders wrote but didn’t live up to.

The project, released in 2019, explored historical connections between capitalism and slavery and showed why racism — slavery’s most obvious legacy in this country — is one of the primary reasons we don’t have a universal health care system like most of the developed world. The project raised the kinds of questions — and presciently provided historical references and citations — students need to grapple with during a time such as this.

Cotton’s words to the Arkansas Democrat-Gazette reveal his motivation for attacking the project: because he appears to be more comfortable with US and Confederate myths about our country’s founding. It seems to offend him that others don’t care for those myths as much as he does. After social media erupted to call out his appalling remarks, he realized his error and quickly tried to backtrack Monday. He absurdly argued that he never said what he clearly said. And his buddies in conservative media have been quick to help him try to spin his way out of his clear admission.

They want the genie put back in the bottle because if it isn’t, it will make their jobs more difficult. It won’t be as easy to sidestep the nation’s current efforts to confront racism.

On Monday, when his words were read back to him by Brian Kilmeade on Fox News, he chuckled and said “that is fake news, Brian. That’s not what I said.”

I’m not sure if we should call that a lie or just delusional.

He went on: “What I said is that many founders believed that only with the Union and the Constitution could we put slavery on the path to its ultimate extinction. That’s exactly what Lincoln said. Of course, slavery is an evil institution in all its forms at all times in America’s past or around the world today. But the fundamental moral principle of America is right there in the Declaration — all men are created equal. And the history of America is the long and sometimes difficult struggle to live up to that principle.”

Cotton, like so many others, clearly isn’t comfortable speaking truthfully about this country’s racial history. That’s why they rely upon absurd qualifiers such as “necessary” for an institution as evil as race-based chattel slavery. In their telling, our great, wise founders were able to defeat what was then the world’s lone superpower, ensure that this would be a democracy we could be proud of two and a half centuries later — but they couldn’t find a way to rid themselves of slavery? They supposedly put slavery on a path to extinction, as Cotton also claimed in the Democrat-Gazette article, but the institution grew by the millions in the decades before more than 600,000 Americans were killed in the Civil War.

Such logic can’t withstand serious scrutiny. That’s why Cotton would rather hold fast to myths. They are easy. Grappling with this country’s racial history is hard.