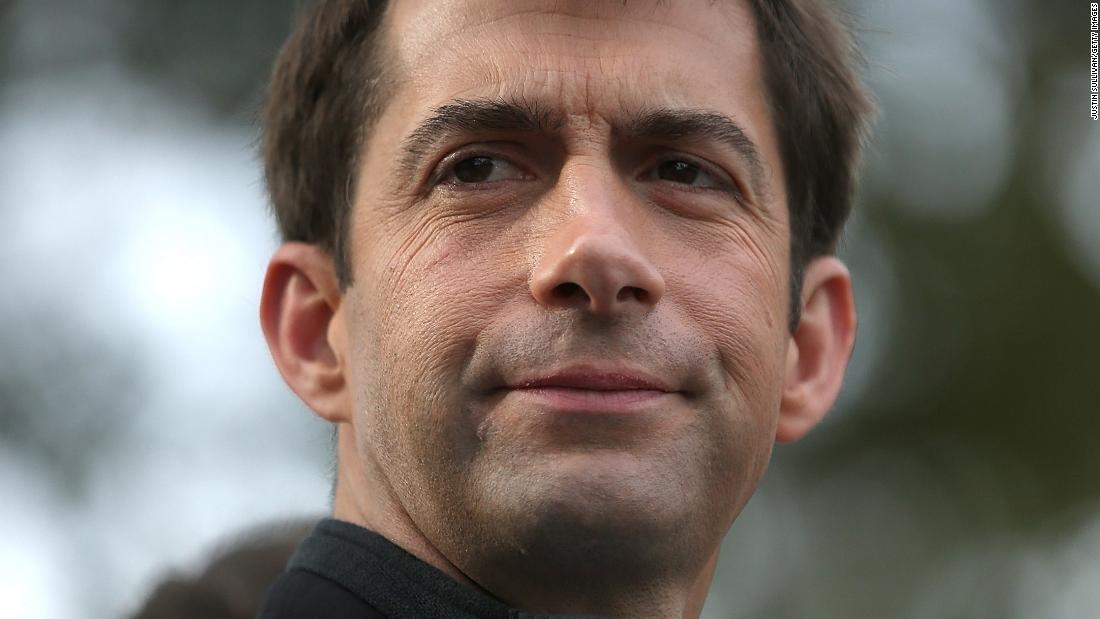 “We have to study the history of slavery and its role and impact on the development of our country because otherwise we can’t understand our country. As the founding fathers said, it was the necessary evil upon which the union was built, but the union was built in a way, as Lincoln said, to put slavery on the course to its ultimate extinction,” Cotton told the Arkansas Democrat-Gazette in an article that was published on Sunday.
Cotton’s remarks to the newspaper drew a swift backlash on social media, prompting the senator to attempt to distance himself from them in a series of tweets in which he claimed he was citing the views of America’s founding fathers, rather than his own.
Cotton’s comments came after he introduced legislation that would prevent federal funds and professional development grants from being given to schools that teach the 1619 Project, which was released last year and has since been developed into educational resources and curricula for use by teachers. The bill appears unlikely to gain any significant traction in the Senate.

Last week, Cotton called the 1619 Project “a racially divisive, revisionist account of history that denies the noble principles of freedom and equality on which our nation was founded. Not a single cent of federal funding should go to indoctrinate young Americans with this left-wing garbage.”

Though the founding fathers were divided on the issue of slavery, with some of them having owned slaves and others being opposed to it, there doesn’t appear to be a record of any of them arguing slavery in the US was a “necessary evil.”
When asked to point to a founding father who used the phrase “necessary evil” to describe the existence of slavery at the nation’s founding, James Arnold, a spokesman for Cotton, referred to a passage from an Abraham Lincoln-Stephen Douglas debate in 1858, but did not provide evidence of a founding father making that claim.

Lincoln did believe that the founding fathers put the institution of slavery in the US on a path to “ultimate extinction,” a position he often stated publicly.

The phrase used by Cotton is “really a kind of shorthand way of describing the complex set of attitudes of the founding generation and it’s not really accurate,” said Adam Rothman, a history professor at Georgetown University who teaches classes on slavery in the US. Rothman added that it’s “bizarre to endorse it in retrospective.”
Cotton later claimed on Twitter that he himself wasn’t backing the idea that slavery was a “necessary evil,” but was instead citing the supposed views of the founders, a defense that the Times writer who was behind the 1619 Project quickly pushed back on.

“You said, quote: ‘As the Founding Fathers said, it was the necessary evil upon which the union was built.’ That ‘as’ denotes agreement. Further, if by path to extinction you mean growing the enslaved (population) from 500k to 4 million at Civil War, a war fought over slavery, then, ok,” Nikole Hannah-Jones, a staff writer for the Times, wrote in response to Cotton’s tweet.

Cotton stood by his defense during an appearance on Fox News on Monday, repeating his claim that he himself wasn’t endorsing the position.

“Of course slavery is an evil institution in all its forms, at all times in America’s past, or around the world today,” he said.

CNN’s Clare Foran and Leah Asmelash contributed to this report.