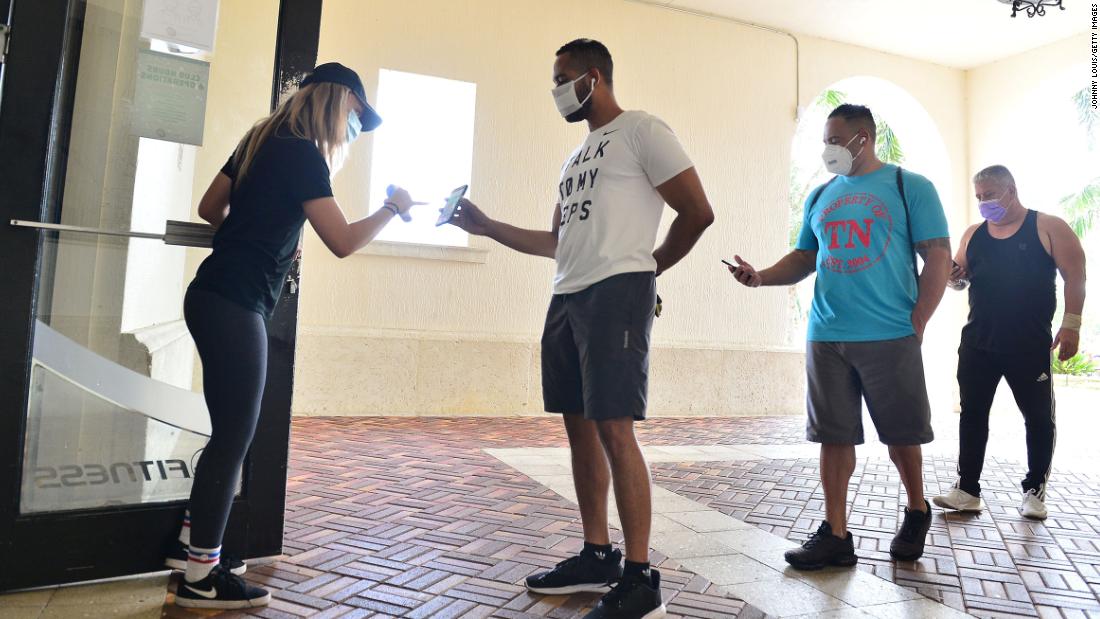 Nationally, the seven-day daily average of new confirmed cases was just under 66,000, according to data from Johns Hopkins University. That is still a startlingly high number of infections, but it’s the lowest it has been in the US in 10 days.

The trend can be seen more clearly in new case totals in Arizona, Texas and Florida. In these states, which reopened without effective safety protocols and saw rapid case spread since June, new cases have flattened or slightly decreased recently.

It’s too early to say whether these trends will last. Across the country, 22 states saw increases in new cases over the past week compared to the week prior, 20 states have been steady, and eight states saw decreases.

Speaking on NBC’s “Today” show, Birx said, “We’re already starting to see some plateauing in these critical four states that have suffered under the last four weeks. So Texas, California, Arizona and Florida, those major metros and throughout their counties.”

Despite the possible plateau, the national seven-day average of deaths, which generally trails weeks behind cases and hospitalizations, is starting to increase.

Meanwhile, the seven-day average of hospitalizations remains at a level on par with April and has not increased substantially in the past week.

However, the Covid Tracking Project, which CNN uses for hospitalization numbers, has indicated some states are seeing issues related to the CDC-HHS handover, which may be keeping hospital numbers down. Hospital data on coronavirus patients is now going to the Trump administration instead of first being sent to the CDC.

The Johns Hopkins University data on total confirmed cases comes from individual counties and states and so is not be effected by the change.

Overall, the US accounts for about a quarter of the world’s cases and deaths, according to Johns Hopkins University.

Within the US, both California and Florida have surpassed New York in terms of total confirmed cases, and Texas is on pace to surpass New York in the next few days.

Those numbers are a bit misleading, though, as New York’s overwhelming coronavirus outbreak occurred in March and April, when testing was scarce.

As officials work to slow its rampant spread, face coverings remain a point of contention with some local authorities declining to enforce mandates.
In Indiana, where a statewide mask order went into effect Monday morning, sheriffs in at least four counties said they wouldn’t enforce the mandate, according to CNN affiliate WXIN.
And in Ohio, where the governor issued a statewide mask order last week, one sheriff already said earlier this month he wouldn’t be enforcing any sort of mandate, according to CNN affiliate WLWT.

“I can tell you this — I am not the mask police. I am not going to enforce any mask-wearing. That is not my responsibility. That is not my job. People should be able to make those choices themselves,” said Butler County Sheriff Richard Jones.

Police in Miami, Florida — what experts call the country’s coronavirus epicenter — issued more than 300 citations in 10 days to individuals and businesses that aren’t abiding by the local mask order.

“The growth rate (of cases) has shown flattening since we implemented the masks in public rule and we’re following the advice of our health care professionals and our hospital administrators who are telling us that what we have to do now is focus on enforcement,” Miami Mayor Francis Suarez told CNN Sunday. “We created a special task force just for that and we’ve been issuing hundreds of tickets over the course of the week.”

Miami-Dade County has reported more than 100,000 coronavirus cases — more cases than all but 12 states. Over the weekend, ICUs were at 137% capacity and there were about 334 patients on ventilators, about a 64% increase in two weeks, according to county data.

Birx highlighted the importance of face coverings during a stop in Kentucky over the weekend.

“What we have recommended is that 100% of people should wearing masks in any indoor public space,” she said.

Birx said the task force was watching 14 states that have seen a significant rise in cases, including Florida, and suggested those states consider closing down bars and limiting indoor gatherings to less than 10 people.

The pattern of infections that officials are seeing across these states, Birx said, is that young people under 30 years old are usually the first to catch the virus and then unknowingly transmit it to their parents, who then transmit it to grandparents and other older folks.

With a continuing upward trend, California is leading the country with the highest number of total confirmed infections — more than 452,280 — followed by Florida, New York and Texas.

At least 36 counties are on California’s watch list and have been ordered to close many of their indoor operations. More than 8,100 deaths across the state have so far been linked to the virus and at least 6,912 people are hospitalized with 1,993 people in ICUs. Health officials said that the state’s positivity rate, a key indicator in how fast the virus is spreading within a community, is on the rise.

That positivity rate — the number of people testing positive compared to how many are getting tested — is at about 7.5%, according to state data. For comparison, New York has brought its rate down to about 1%, a statistic the governor touted as “really great, great news.” Miami-Dade County’s positivity rate is at about 18%, according to county data.

In Texas, the death toll surpassed 5,000 Sunday, after the state reported 153 fatalities in a day. Across the state, at least 10,075 people are in hospitals.

In Louisiana, which has reported more than 107,500 infections, health officials said that about 94% of the 3,840 new cases reported Sunday were tied to community spread, rather than places were residents congregated together.

Communities will have to decide school openings

With just several days left in July, educators across the country are working to determine what happens when it’s time for students to return to class.

Guidelines released from the US Centers for Disease Control and Prevention last week came down hard in favor of reopening schools, saying children don’t suffer much from the virus and are less likely to spread it than adults. The guidelines recommend local officials keep schools closed if there is substantial, uncontrolled transmission of the virus in an area.

There won’t be a uniform threshold for when schools should reopen, Health and Human Service Secretary Alex Azar told CBS’s “Face the Nation” Sunday.

“Each community is going to have to make the determination about the circumstances for reopening, and what steps they take for reopening,” Azar said. “But the presumption should be that we get out kids back to school and figure out how to make that happen.”

While the Trump administration has remained steady in its message in recent weeks that it wants schools to reopen, educators have protested a return to school next month, arguing that even if children don’t experience the virus in the same ways, the decision to return could be deadly for teachers and staff.