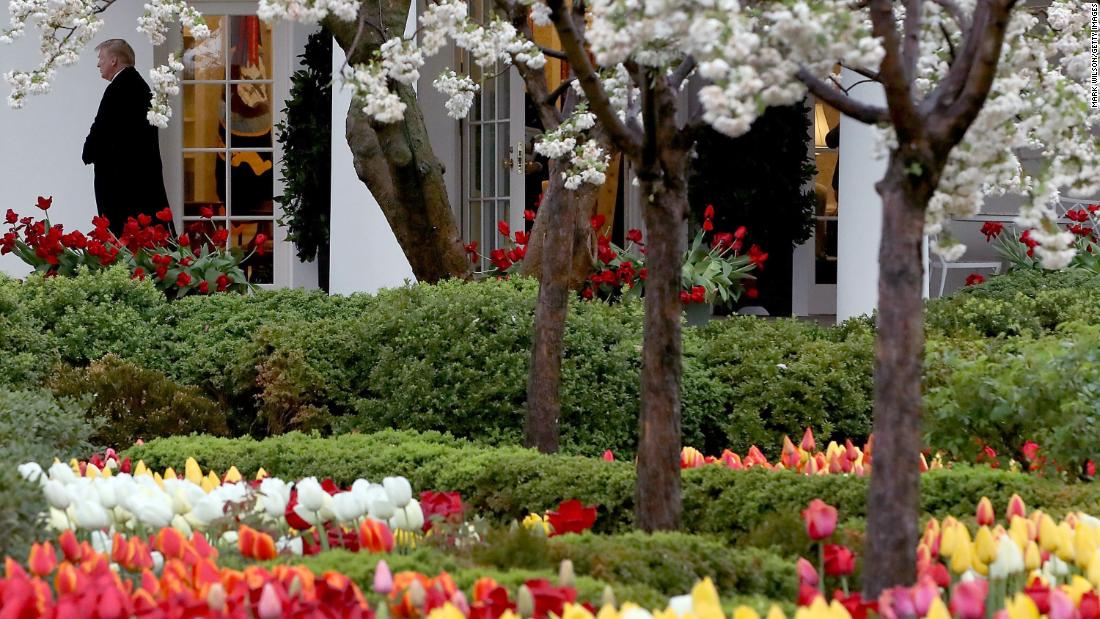 Trump intends to restore the space to more resemble the original design and formation of the Rose Garden, established by President John F. Kennedy, and implemented in 1962 by horticulturist and philanthropist Rachel “Bunny” Mellon. The renovation, which will include excavation, could take several weeks, according to a source familiar with the timeline, and the Rose Garden will, during that time, be out of commission for use.

“The very act of planting a garden involves hard work and hope in the possibility of a bright future,” the first lady said in a statement. “Preserving the history and beauty of the White House and its grounds is a testament to our nation’s commitment to the care of this landscape and our dedication to American ideals, safeguarding them for our children and their children for generations to come.”

President Donald Trump has used the Rose Garden more frequently in recent weeks as a space to hold news conferences. In the era of Covid-19, the outdoor venue provides more safety from potential spread of the virus for journalists and guests, as medical experts maintain being outside is more optimal than gathering indoors.
The decision to revamp the Rose Garden was made several months ago, according to the source familiar with the first lady’s plan. Renovations and large upkeep projects at the White House are oftentimes made during the month of August, when the first family is commonly away from Washington on summer vacation. In August 2017 and 2018, when the Trumps were in Bedminster, New Jersey, projects meant to repair and spruce up the White House took place.

The Rose Garden is the latest White House renovation project for Trump, who already has revamped several spaces, including the White House bowling alley, the wall coverings in the Red Room, the furnishings in the Blue Room, the draperies in the Green Room and the rug in the Diplomatic Reception Room, to which she had added a border of the flowers representing each of the 50 states. Renovations of the White House’s public rooms (the latter four) are funded by private donations to the White House Historical Association, a nonprofit institution that serves to oversee the conservation and upkeep of the People’s House. The cost of the renovation of the bowling alley was covered by the Bowling Proprietors’ Association of America, according to the White House.

The Rose Garden renovation will be financed with private donations, according to two sources familiar with the project.

In March, as the coronavirus began to take hold in the United States, Trump was criticized for providing an update on another renovation she is spearheading: the White House Tennis Pavilion, a privately funded project on the South Lawn for use only by the first family and their guests. Trump first announced the pavilion renovation last October in a tweet featuring a picture of herself with a ceremonial shovel and a statement that said in part, “It is my hope that this private space will function as a place to gather and spend leisure time for First Families.”
Trump’s March post — expressing her excitement and featuring photographs of the first lady wearing a hard hat and looking over apparent architectural plans — met a plethora of negative reaction that seized on the first lady’s post about a luxurious recreational venue despite a lack of public sentiments about the ongoing global pandemic and rising number of American deaths. The backlash prompted Trump to make a rare statement in her defense.

“I encourage everyone who chooses to be negative (and) question my work at the ‪@WhiteHouse to take time and contribute something good (and) productive in their own communities,” she tweeted.

The source familiar with the plans tells CNN the Rose Garden facelift was decided upon well before the pandemic, though the timing of the reveal comes as the country faces ongoing spread of the deadly disease. As positive reported cases of Covid-19 in the United States surpassed the 4 million mark last week, Trump again risks facing charges of “tone deafness” in the wake of her renovation announcement.

“I think that the first lady should be aware that this could certainly look like another ‘let them eat cake’ moment,” says Kate Andersen Brower, a CNN contributor and author of “Team of Five: The Presidents Club in the Age of Trump.” “I think it’s important for her to point out that this is a restoration that has nothing to do with the Trump administration, but about making sure that the White House is a pristine and beautiful home for any president who occupies it. But, yes, the timing could not be worse as the country is being ravaged by Covid and there is major economic and social upheaval.”

Trump’s decision to leave her mark on the Rose Garden, and restore it to its original design plan, was prompted initially by the need for general upkeep, as well as to prevent the constant rotation of different plants and flowers and shrubs, according to a source familiar with the discussions.

The history of the Rose Garden

First conceptualized as the Rose Garden in 1913 by Woodrow Wilson’s first wife, Ellen Wilson, the plantings were mid-way through design when Ellen died in 1914. The project was picked up by Wilson’s second wife, Edith, who continued the addition of rose plants to the space formerly known as the West Garden. But it was Kennedy who commissioned the creation of the iconic version of the Rose Garden that we know today as the most notable outdoor space possibly in all of American politics.

In 1961, Kennedy asked his personal friend, Bunny Mellon, to redesign the 125-foot long, 60-foot wide garden. Kennedy, with his wife, Jacqueline Kennedy, had just returned from a lengthy European tour, where he marveled at the grandeur and beauty of elaborate formal gardens adjacent to official residences.

“The President had noted that the White House had no garden equal in quality or attractiveness to the gardens that he had seen and in which he had been entertained in Europe,” said Mellon in her personal recounting of the development of the Rose Garden, which she gave to the White House Historical Association in 1983. “He wanted to start, in the greatest haste, to remake the area near his office at the west end of the White House, known as the Rose Garden, into an area both useful and attractive.”

Mellon designed a garden filled with rose plants and other flowers, as well as blossoming crab apple trees, set in diamond-shaped boxes of hedges. In addition to the famous roses, she added lilies and tulips, verbena and daisies, chrysanthemums and geraniums — multiple species of vibrant, seasonal florals to surround the wide swath of green grass in the middle. Mellon wanted the trees and flowers to literally “frame” the green of the lawn, which she made large enough to accommodate hundreds of guests. The Rose Garden has in the decades since hosted numerous presidential events, from ceremonies to announcements and celebrations. (Richard Nixon’s daughter, Patricia, was married there in 1971.)

“Mellon said JFK was really the person responsible for the garden and that he never stopped being interested in it. It was a calming influence outside the Oval Office for him and every president since,” said Brower. “The Rose Garden has become a symbol of the American presidency much like the Resolute desk in the Oval Office. Rose Garden addresses are often important and historic statements.”

Melania Trump has made use of the Rose Garden, too, hosting the second Trump administration State Dinner there for Australian Prime Minister Scott Morrison’s official visit last September, with an al fresco, black-tie affair, complete with centerpieces of yellow roses and golden wattle, Australia’s national flower. Like most aesthetic details at the White House during Trump’s tenure, the decision on the dinner’s location and its décor was determined by the first lady.

In remarks at a May 2019 reception for the White House Historical Association, Trump said, “Our family is grateful to live in this true symbol of our nation’s history, but we are even more honored to play a part in restoring and enhancing our country’s sacred landmark.”

previousRescuer abseils 130 feet down airless well to save trapped owl
nextX Prize founder Peter Diamandis: A.I. will be most important tool to keep a job after coronavirus