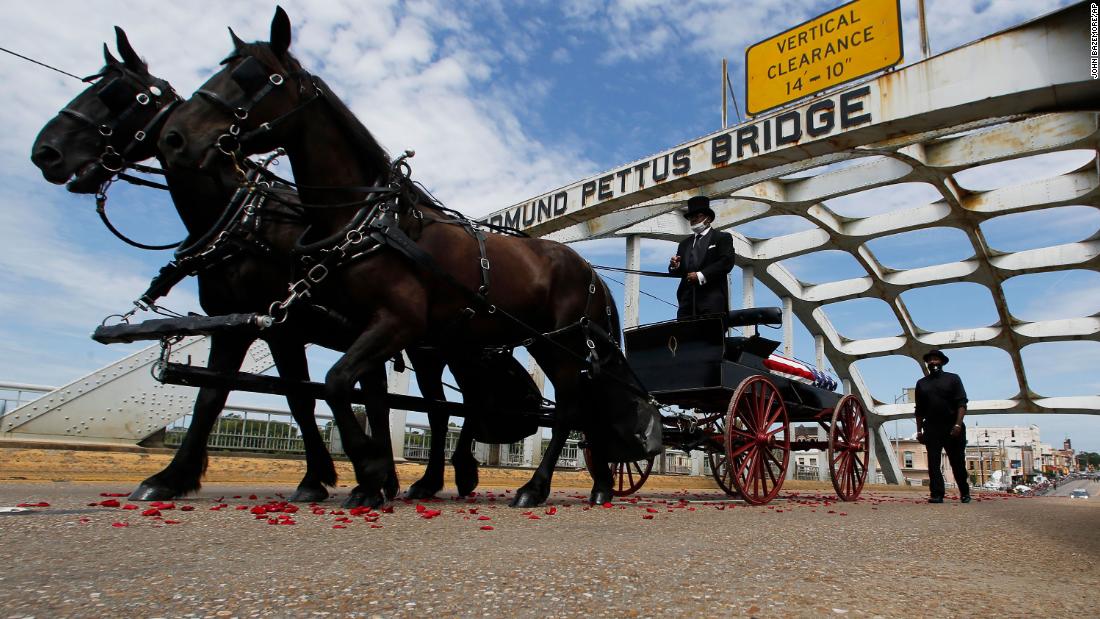 Following a short ceremony outside of Brown Chapel AME Church on Sunday, Lewis’ body traveled on a horse-drawn caisson through several blocks of downtown Selma to the Edmund Pettus Bridge, where Lewis’ flag-draped casket crossed. It was on that bridge that a 25-year-old Lewis and other marchers were met by heavily armed state and local police who attacked them with clubs, fracturing Lewis’ skull.

The caisson paused when it reached the bridge’s steel arch that bears its name.

The final crossing provided a new chapter in the history of the bridge and Lewis’ relationship to it: The concrete and steel structure that was once stained with blood during the violent clash was covered with rose petals on Sunday, a somber moment honoring the fallen civil rights icon that stood in marked contrast to the scene in which Lewis was brutalized 55 years ago.

A small group of family members — including Lewis’ son John-Miles Lewis, brothers Freddie Lewis, Samuel Lewis and Henry “Grant” Lewis, and the late congressman’s sister, Rosa Tyner — accompanied the caisson in part of the procession. The black caisson was modeled after the one Dr. Martin Luther King Jr. had for his funeral, with red-brown wheels and pulled by two black horses.

It was also met by Alabama state troopers. Fifty-five years ago, state troopers were among the law enforcement officers that clashed with protesters on the same bridge.

Scores of people lined the streets near the bridge to pay their respects. Among them was Velma Martin, who drove five hours from Orrville, Alabama, to witness Lewis’ final crossing.

“I’m out here to celebrate a legend, the life of a person who (sacrificed) for others,” she told CNN. “So it gives me great honor and pleasure to just get up and stand here to salute him for what he’s done.”

Sunday’s event is part of a six-day memorial ceremony honoring the longtime Georgia Democrat that began on Saturday in his hometown of Troy, Alabama. The civil rights legend died on July 17 at the age of 80 after a six-month battle with cancer.

The day Lewis and the marchers initially crossed the bridge became known as “Bloody Sunday” and galvanized Americans’ support for the Voting Rights Act of 1965 that was signed into law by President Lyndon B. Johnson.
“I gave a little blood on that bridge,” Lewis said years later. “I thought I was going to die. I thought I saw death.”
The march has been reenacted many times on its March 7, 1965, anniversary. In 2015, President Barack Obama marked the 50th anniversary of the march by delivering a speech at the foot of the Edmund Pettus Bridge, and the following year, the marchers received a Congressional Gold Medal, Congress’ highest civilian honor.

Lewis served as the US representative for Georgia’s 5th Congressional District for more than three decades and was widely considered the moral conscience of Congress because of his decades-long embodiment of the nonviolent fight for civil rights. He was known for getting into “good trouble,” and by his own count, the longtime congressman was arrested more than 40 times during his days of civil rights activism.

In the week since his death, Democratic lawmakers have called on President Donald Trump and Senate Majority Leader Mitch McConnell to pass legislation that would expand voting rights in honor of Lewis’ legacy. At the same time, there have been renewed calls to rename the Edmund Pettus Bridge in honor of the congressman, which includes a petition with more than 500,000 signatures. The bridge’s namesake, Edmund Pettus, was a Confederate general and leader of the Ku Klux Klan in Alabama.
Lewis visited the bridge earlier this year to mark the 55th anniversary of the historical march. In an emotional scene, Lewis locked arms with House Speaker Nancy Pelosi and other members of Congress to commemorate the pivotal moment for Black Americans.

“It is good to be in Selma, Alabama, one more time,” Lewis said as he spoke to the crowd assembled on the bridge. “To take a little walk to try to dramatize the need for the rights of all our people to be able to participate in the democratic process.”

This story has been updated with additional details from the bridge crossing.

previousPolice and protesters clash in Portland and cities across the U.S. in violent weekend
nextHow Black Lives Matter went from a hashtag to a global rallying cry