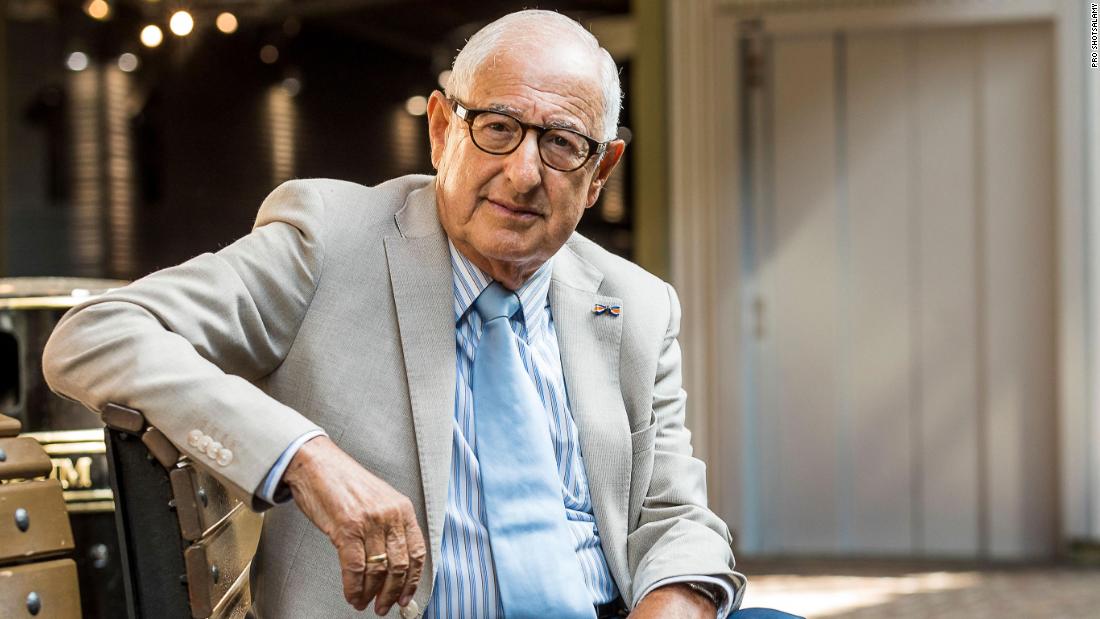 In 2018, Salo Muller successfully lobbied the Dutch state-owned railway company for an apology and compensation to victims and their surviving relatives who were transported on its trains toward Nazi death camps during World War II.

Nederlandse Spoorwegen agreed to settle the case with 500 survivors and thousands of their direct descendants.

Now the 84-year-old, a former physiotherapist for Amsterdam’s Ajax football club, has written to German Chancellor Angela Merkel and is seeking compensation from her government, as well as from the national railway company, Deutsche Bahn.
According to Muller’s own website, his parents were taken to the Westerbork camp in the northeast of the Netherlands in 1941, when he was 5 years old. From there, they were taken to Auschwitz, where they were killed. Muller’s mother had been picked up in a raid shortly after she dropped him off at kindergarten; he spent the rest of the war in hiding.
According to the United States Holocaust Memorial Museum (USHMM), the Dutch government set up the camp at Westerbork in 1939 to hold Jewish refugees who had entered the Netherlands illegally, many from Germany.

Between 1942 and 1944, following the German invasion of the Netherlands, Westerbork served as a transit camp for Dutch Jews before they were deported to Nazi death camps in German-occupied Poland.

Muller’s lawyer, Axel Hagedorn, wrote in his letter to Merkel that the case centers on the “Jews, Roma and Sinti, who were transported by the railway trains to the Westerbork concentration camps and then taken by the Nazis to the extermination camps in Eastern Europe by train.”

Dutch Jews were often forced to pay for their transportation, which netted the German railways millions of Reichsmarks between 1941 and 1944, Hagedorn wrote.

“This inflicted suffering becomes particularly reprehensible, when you know that the transported Jews had to pay the transportation costs themselves,” he added.

Hagedorn told CNN that there are varying estimates of the money the railway earned in this way, but that he could not be sure of an exact amount.

In his letter to Merkel, Hagedorn said: “The transport through the area of the German Reich was carried out by the German Reichsbahn (Railway). My client thinks it is about time for the Republic of Germany to take responsibility for their injustice.”

A government spokesman confirmed receipt of Muller’s letter and told CNN that it would be “carefully considered.”

The matter was raised at a German government press conference on Wednesday.

Government spokeswoman Ulrike Demmer said that while she had not personally seen the letter, “Germany, of course, is committed to its responsibility for the crimes of Nazi rule.”

She added: “We will never forget the crimes committed by Germans during World War II. To this day, they fill us with great dismay and shame.”

In a statement provided by his lawyer, Muller told CNN: “I certainly hope that awareness of the historic responsibility leads to a personal meeting with Chancellor Angela Merkel.”

Deutsche Bahn was formed in 1994, following Germany’s reunification. The company told CNN that even though it “is not the legal successor to the Deutsche Reichsbahn, it is aware of its historical responsibility.”

Intense discussions over Holocaust compensation payouts in the 1990s led to the creation of the Remembrance, Responsibility and Future foundation and Deutsche Bahn contributed several millions to its assets, a spokesman told CNN. In addition, it launched a five-year project with the foundation in 2010 which, it said, benefited “the survivors of forced labor, deportation and persecution.”

While the spokesman did not comment on Muller specifically, he said: “We advocate a critical examination of the role of the Reichsbahn during the Nazi era.”

CNN’s Frederik Pleitgen and Josefine Ohema contributed to this article.

previousWatch this high-yield ETF for signals as to where the stock market heads next, chartist says
nextUnsealed documents show Epstein, Maxwell correspondence in 2015