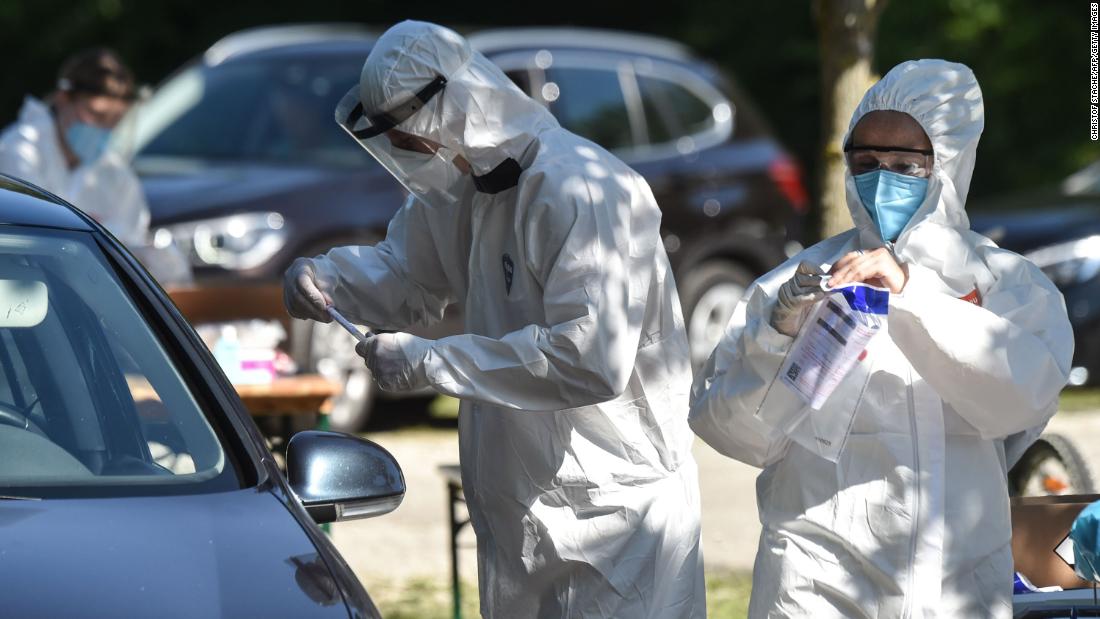 Germany is a perfect example; its center for disease control, the Robert Koch Institute (RKI), on Monday said that a recent spike in cases was “very disturbing.”

The country was held up as a poster-child for how to handle the pandemic, with its rapid response, mass testing capacity, and Chancellor Angela Merkel’s calm and clear communication all winning praise.

While more than 4% of patients with coronavirus died worldwide in March, Germany’s Covid-19 mortality rate was just 0.4% — despite a high number of reported cases.

By mid-April, it had tested more than 2 million people and was carrying out around 400,000 tests a week, according to the RKI.
Unlike some world leaders, Merkel — a former scientist — appeared to grasp the seriousness of the situation early, making a persuasive speech in March to convince the public that widespread restrictions were necessary.
Germany only began reopening after its reproduction, or “R” rate — the average number of people each patient with the virus goes on to infect — had fallen below 1, to 0.7.
But once the lockdown was eased, new outbreaks soon followed, with a spike of 900 cases in a day in May and a series of clusters recorded at slaughterhouses.
The number of new daily cases had dropped to around 500 a day in recent weeks, but rose to 815 on Friday, the RKI said.
Germany’s four-day reproduction rate was 1.28 on Monday, and its seven-day “R” rate was 1.10, according to the Institute. It said the new cases were linked to large gatherings, workplaces and community facilities, as well as to travelers returning from other countries.

Merkel’s chief of staff, Helge Braun, said Monday that the figures were a “cause for concern,” and that in order to tackle the pandemic in the fall, cases need to be kept “well under 500” a day during the summer.

The government is now offering free tests to residents of the Bavarian town of Mamming, southern Germany, which is facing an outbreak among seasonal workers on a vegetable farm. Workers at other Bavarian farms will also be tested.

The rise in European cases reflects the acceleration seen in Australia and in Asian countries that had appeared to have the virus under control.

UK Prime Minister Boris Johnson warned on Tuesday that there were signs of a second wave in Europe.

Speaking to journalists about the UK’s decision to impose a quarantine on people returning from Spain, Johnson said: “What we had to do is take swift and decisive action where we think that the risk is starting to bubble up again.”

“Let’s be absolutely clear about what’s happening in Europe, amongst some of our European friends, I’m afraid you are starting to see in some places the signs of a second wave of the pandemic,” Johnson said.

Spain had been recording fewer than 400 new daily cases for most of June, but reported 855 new coronavirus cases on Monday, the Spanish Health Ministry’s data showed.

The Director of the Spanish Center for Health Emergencies, Fernando Simon, said there was a high number of cases in Aragon and Catalonia, but he did not think it was a second wave. The UK government reported 685 new cases on Monday, with cases remaining relatively stable in recent weeks.

The growth in infection has been tied to an increase in movement linked to summer vacations.

Germany and France have both announced plans to test passengers from “high risk” countries on arrival — including those from the United States — in addition to compulsory 14-day quarantines.

France, which is offering free tests, has seen new daily cases creep back to the same level as when its lockdown lifted on May 11, Health Minister Olivier Veran told the French newspaper Le Parisien Sunday.

Veran said the country was not yet in a second wave of the pandemic, but warned that cases were rising sharply — exceeding 1,000 in 24 hours last week.

Echoing research from Japan suggesting that many of the new clusters were originating in people under 40 who displayed few symptoms, Veran said patients were younger than before, and in a tweet appealed to young people in particular to maintain vigilance.

On Friday, the French Health Ministry said the “R” rate had risen to 1.3 and warned that “the virus is circulating throughout the country.”

The mayor of Quiberon in Brittany issued a nighttime curfew on beaches, parks and public gardens from Sunday after an outbreak in the popular tourist destination linked to young people gathering at bars or similar settings. Masks were also made mandatory at open-air markets and on busy streets, after the government made them compulsory in all indoor spaces last week.

He called on people to greatly reduce social contact, fearing “a detrimental relaxation in behavior and the strong potential for the spread of the virus in the territory.”

France’s Prime Minister Jean Castex said Saturday that he wanted to avoid the negative impact of a national lockdown and instead would look to impose localized restrictions, as seen in Germany and the UK. Travel operators have also called for “regional corridors” to enable trips to certain areas, helping to minimize economic damage from the pandemic.
But Belgium is tightening restrictions nationwide until the end of August after new infections increased in the country by an average of 193 a day last week — up 91% compared with the previous seven days, a spokeswoman for Prime Minister Sophie Wilmes told CNN.

From Wednesday, social bubble sizes will be reduced from 15 to just five people, gatherings will be capped at 10, and stores will reinstate earlier rules which limited people to 30 minutes solo shopping.

Contact tracing will be reinforced in higher risk situations. Belgium also made masks compulsory in outdoor markets and busy shopping areas in addition to indoor spaces.

“These measures are not advice, they are orders,” Wilmes said, according to the spokeswoman, acknowledging that this strengthening of the rules was a “hard blow for our morale, but we’d prefer to take these measures today than to regret it tomorrow.”

As for Italy, once the epicenter of the pandemic, the country’s health minister said last week that it was now “out of the storm,” although it has some way to go to eliminate the virus.

But new daily cases exceeded 300 last week for the first time in a month, according to figures from Johns Hopkins University. And the evidence from other nations shows that nothing is guaranteed, suggesting anyone rushing to book a trip to Italy should be wary of further clusters of cases.

The Italian government on Friday introduced a new quarantine order for travelers entering the country from Romania or Bulgaria. “The virus is not defeated and continues to circulate. This is why caution and attention are still needed,” said Health Minister Roberto Speranza.

“The international situation is worrying, we are in the worst moment of the epidemic in the world,” said Speranza, cautioning that the crisis will only “be a thing of the past” when a successful vaccine is developed.

The evidence shows that the bluntest instruments of control are working against the virus — such as lockdowns, quarantines, travel bans and social distancing — and these may be humanity’s most reliable tools until a vaccine is found and distributed.

Whether a more nuanced approach can work will soon become clear, as countries fumble to find the most effective and least punitive defenses against further waves of infection.