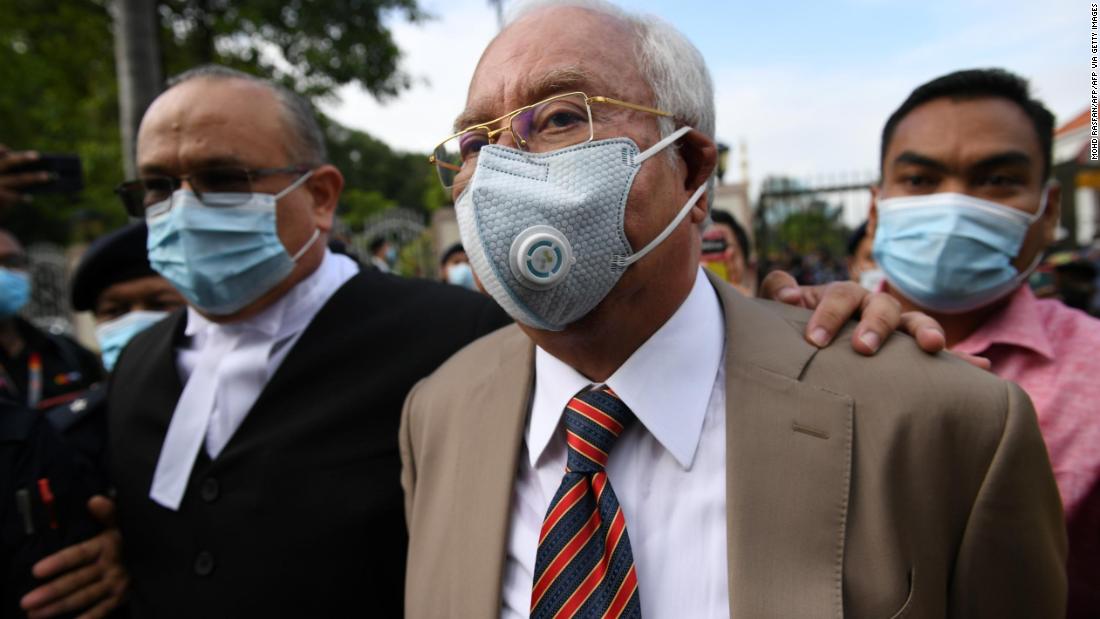 High Court judge Nazlan Mohammed Ghazali found Najib guilty on all counts brought against him — abuse of power, money laundering and criminal breach of trust — in the current trial, which relates to $10 million of funds which were deposited into his personal accounts from a former unit of 1MDB.

Najib has consistently argued his innocence, welcoming the trial — which he fought against tooth-and-nail before being deposed as prime minister — as a chance to clear his name.

Ahead of Tuesday’s verdict, he wrote on Facebook that “no matter what the decision is tomorrow in the High Court, it doesn’t end here,” indicating that he would appeal. “I don’t give up,” he added.
The ruling is the second major development in the 1MDB case this month. Last week, Goldman Sachs, which underwrote much of the 1MDB fund and was facing a host of criminal and regulatory proceedings in Malaysia, agreed to a $3.9 billion settlement with the country’s government.

Najib faces prison terms of up to 15 or 20 years for each charge, as well as hefty fines. Sentencing will be announced at a later date. Najib’s lawyers have said they will appeal.

Other trials against Najib relating to the 1MDB scandal are still ongoing.

The 1Malaysia Development Berhad fund was created soon after Najib took office in 2009, pumping billions in public money into it, with the stated purpose of leading “market-driven initiatives to assist the government in propelling Malaysia towards becoming a developed nation that is highly competitive, sustainable and inclusive.”

Instead, according to United States prosecutors, 1MDB was used as a slush fund by Najib, his financier Jho Low and other high-ranking officials at the fund, who allegedly embezzled more than $3.5 billion over six years. Swiss prosecutors would later put that figure at over $4 billion.

“(These funds) were intended to grow the Malaysian economy and support the Malaysian people. Instead, they were stolen, laundered through American financial institutions and used to enrich a few officials and their associates,” said US Attorney General Loretta Lynch in 2016, after the US Department of Justice launched a case against 1MDB in a bid to recover more than $1 billion connected to the conspiracy that was allegedly laundered through the US.

The case attracted international attention thanks to the scale of the graft and the audacity of what Low used some of the allegedly pilfered funds for. According to US prosecutors, Low laundered money from 1MDB through Red Granite, which used it to fund Hollywood movies including “The Wolf of Wall Street,” “Dumb and Dumber To,” and “Daddy’s Home.”

Low has consistently professed his innocence, but last year he struck a $700 million deal with the US government to end a legal case against him.

He is still wanted for crimes in Malaysia, however, and has been an international fugitive for years now, believed by some to be hiding out in China.

In early 2015, Clare Rewcastle-Brown, a British journalist and founder of the Sarawak Report website which reports on corruption in Southeast Asia, received about 227,000 leaked documents relating to 1MDB.

After months of investigation, Rewcastle-Brown published a story alleging more than $700 million had been transferred from the fund to the personal bank accounts of Prime Minister Najib. The Wall Street Journal also published several groundbreaking reports on the scandal, based partly on the same leaked documents.

Following the reports, Malaysian officials raided 1MDB’s offices in Kuala Lumpur and investigations were also launched in Hong Kong, Australia, Singapore, Switzerland and the US. Najib told reporters the wrongdoers would be brought to justice.

However, Najib’s government consistently blocked probes that appeared to threaten him, including removing the Attorney General who was investigating him and replacing the prosecutor with an ally who later cleared Najib.

Those efforts came to naught, however, when Najib was turfed out of office in a shock election result in 2018, with an opposition coalition winning power in a landslide, clearing the way for the former leader’s prosecution.
Within days of the stunning election loss, Najib and his wife were barred from leaving the country. Police soon raided their properties and seized millions of dollars in luxury goods allegedly linked to the 1MDB funds.

In July 2018 — three years after the first 1MDB stories began emerging — Najib was charged with four counts of corruption. The charge sheet was later expanded to cover dozens of other alleged crimes.

Over five years after the first 1MDB stories emerged, Malaysia’s government has indicated a desire to finally put the scandal behind it. As well as settling the case with Goldman Sachs, prosecutors also dropped charges against Najib’s stepson and “Wolf of Wall Street” producer Riza Aziz.
Despite the myriad charges against him, Najib has remained a force in Malaysian politics through the party he once led, United Malays National Organisation (UMNO). Earlier this year, the coalition that toppled Najib fell apart and was itself removed from office, and the current prime minister, Muhyiddin Yassin, relies on UMNO for power.

This had led to some speculation that the government might drop cases against Najib, and observers had long warned that if the cases dragged on too long, the onetime “Teflon prime minister” might return to power and effectively pardon himself.

A conviction might benefit Muhyiddin as much as Najib’s other political rivals, however.

Writing this week, Bridget Welsh, an expert on Malaysian politics at the University of Nottingham, said that “Najib — not opposition leaders Mahathir or Anwar Ibrahim — is currently Muhyiddin’s most serious political competitor for national leadership.”

“If Najib is convicted, he will begin an appeal process that will likely put him out of contention for the next general elections and weaken his hold on UMNO, having to rely on proxies for power,” she added.

Soon after the verdict was announced, Welsh wrote on Twitter that it “closes door on Najib’s comeback.”

previousEven countries that got coronavirus under control are now struggling, that’s deeply concerning for the rest of the world
nextMajor League Baseball season start overshadowed by Covid-19