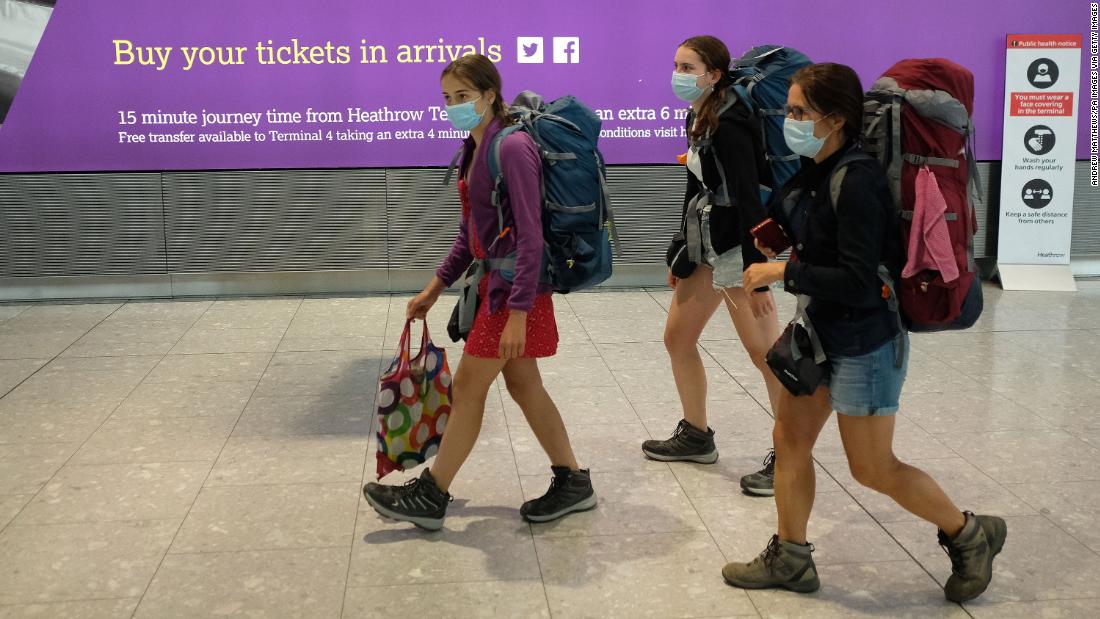 (CNN) — British tourists have been left disappointed by a UK government decision that requires all people returning from Spain to self-isolate for 14 days.
In a surprise announcement made by the British government on Saturday, the previous travel corridor between the UK and Spain ended with immediate effect.

The abrupt reversal followed a rise in the number of coronavirus cases in Spain, where authorities reported more than 900 new infections on both Thursday and Friday.

Joe Allen, 32, a TV producer from London who is currently in Madrid with some friends on a short visit, told CNN that the British government’s handling of the U-turn appeared “heavy-handed.”

Although he acknowledged that the change was made for “sensible” reasons, Allen said its “execution could have done with some work.”

He suggested that the government could have allowed those tourists already in Spain to return without needing to self-isolate, adding that he will most likely lose work as a result of the decision.

Emily Harrison, a holidaymaker from Essex, also expressed her frustration at the government’s announcement.

Before catching a flight back to London from Madrid airport, Harrison told Reuters that the news was “really quite upsetting,” as she would no longer be able to attend a wedding on her return.

Travelers arrive at Gatwick Airport, England, following the news that holidaymakers returning from Spain will need to self-isolate for 14 days.

However, British Foreign Secretary Dominic Raab defended the government’s action, telling Sky News that it “took the decision as swiftly as we could, and we can’t apologize for doing so.”

His remarks came as the Spanish government declared that Spain is a “safe country.”

The “outbreaks are localized, isolated and controlled,” a spokeswoman for the Spanish Foreign Ministry said.

Following the decision from the British government, the holiday tour operator TUI said in a statement that it would be canceling “all holidays to mainland Spain” until August 9.

Andrew Flintham, TUI’s Managing Director, earlier said the company was “incredibly disappointed” by the reversal from the British government.

In its most recent statement, the company urged the government to work closely with the travel industry, adding that “this level of uncertainty and confusion is damaging for business and disappointing for those looking forward to a well-deserved break.”

British Transport Secretary Grant Shapps is among those currently in Spain, a spokesman told CNN on Sunday.

“I think that tells you everything about the government’s approach to this,” the Shadow Health Secretary Jonathan Ashworth said in reference to Shapps’ location.

He described the government’s messaging about the change in policy as “frankly shambolic.”

The UK has the third highest Covid-19 death toll of any country and has more cases and fatalities than Spain.

Speaking to reporters in Madrid on Sunday, Gonzalez Laya said the popular holiday destinations should be excluded because the epidemiological Covid-19 data there is “extremely positive” and “well below data in the UK.”

Gonzalez Laya added that Madrid would not retaliate against London’s decision, saying it is “not a tit-for-tat exercise.”

“If we think that in any country in Europe the epidemiological data requires stricter measures on our side we will do this,” Gonzalez Laya also said.

previousJohn Lewis to make final journey across Edmund Pettus Bridge in procession
nextTech employees are delaying vacations because of coronavirus, so employers are forcing them to take time off to avoid burnout