‘Black Is King’: Beyoncé’s visual album is a feast of fashion and symbolism 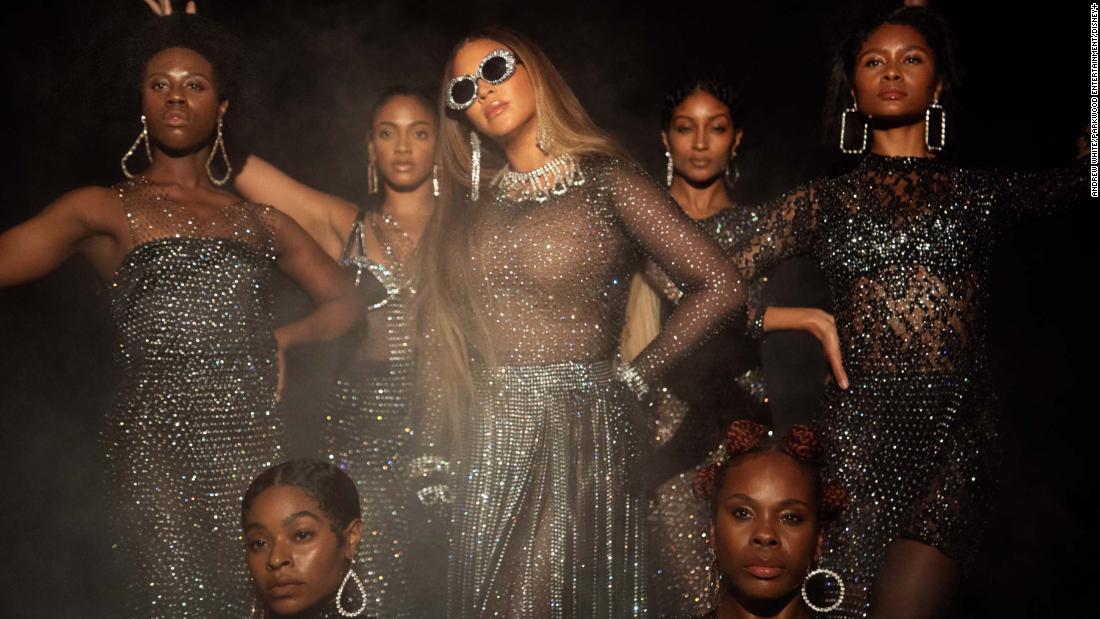 There are many quotable lines and lyrics in “Black Is King,” Beyoncé’s new visual album, which dropped today on Disney+. But two in particular seem especially apt to describe the stylistic feast the artist has created. The first comes three minutes in: “Let Black be synonymous with joy.”

The second arrives half an hour later, on the song “Mood 4 Eva,” featuring Jay-Z, Childish Gambino and Malian singer Oumou Sangaré. Clad in a full-length leopard gown with a higher-than-high slit, Beyoncé laughs at the camera as she sings, “I’m a whole mood.”

The almost 90-minute-long film is evidence of both affirmations.

Conceived as a celebration of “the breadth and beauty of Black ancestry,” as Beyoncé wrote on an Instagram post announcing its release, “Black Is King” is a companion to 2019’s “The Lion King: The Gift,” the album she made to accompany Disney’s CGI remake of the 1994 animated movie. (Beyoncé voiced adult Nala in the film.) It follows a young man’s journey to self-discovery, with a focus on Black history and African traditions, told through the artist’s own narration.

Beyoncé in “Mood 4 Eva” from the visual album “Black Is King” on Disney+. Credit: Parkwood Entertainment/Disney+

Aesthetically, though, the project is a world unto itself. Shot around the world, from South Africa to West Africa, England to Belgium, New York to Los Angeles, it shows Queen Bey — who wrote and directed the project, and is executive producer — in a universe of phenomenal, larger-than-life looks and sets that are as powerful and artful as the cultural messages conveyed through the music.

The fashion moments, curated by Bey’s longtime stylist and costume designer Zerina Akers, are too many to count. Just like in “Lemonade,” released in 2016, Beyoncé transitions seamlessly from outfit to outfit, from block colors to patterns, from major European labels to independent African brands.

There’s a dreamy floral ruffled Erdem gown from the British house’s Autumn-Winter 2019 collection, but also a long-sleeved, fitted bodysuit by French label Marine Serre featuring the brand’s signature crescent moon print. Sequined body-con dresses are followed by fierce power suits and flowing, feminine pieces, like the yellow ensemble the artist wears in a celestial performance of “Spirit” at the end of the movie, surrounded by a Black choir wearing silky fuchsia pants and blazers. Mesmerizing to watch, the constant switching of styles allows Beyoncé to fully embody a range of characters.

Accessories also play a big role in “Black Is King,” from sunglasses (tiny, cat-eye, diamond-encrusted, you name it) to towering headdresses that pay homage to African fashion traditions and the Egyptian queen Nefertiti. Earrings are big and flash; bangles adorn the lengths of her arms; pearls appear and reappear throughout. Nothing is understated, and that’s the point.

This sartorial flair is shared by the rest of the cast, too. Jay-Z and the young protagonist look dapper in camel-colored suits, paired with matching turtlenecks and oversized necklaces. Tina Knowles-Lawson, Bey’s mom, appears in a hot pink suit that’s as sharp as the headpieces that goes with it. Even Blue Ivy looks on point in a ballgown and pearls.

The choral moments are perhaps where the film’s aesthetic prowess really shines. A synchronized swimming number reminiscing of Esther William’s aquatic technicolor musicals of the 1940s and ’50s is a hypnotic kaleidoscopic dream in orange and fuchsia, with Bey at the center. The final choreographed sequence in the middle of the desert, where dancers don primary colors, looks like a moving painting.

These scenes epitomize Beyoncé’s creative mission for the past few years: honoring Black histories and identities, and celebrating Black talent.

“The events of 2020 have made the film’s vision and message even more relevant, as people across the world embark on a historic journey,” she wrote on Instagram. “I believe that when Black people tell our own stories, we can shift the axis of the world and tell our REAL history of generational wealth and richness of soul that are not told in our history books.”

Tags:'Black Is King': Beyoncé's visual album is a feast of fashion and symbolism - CNNfashion